It’s been awhile since I’ve written in, mainly because Cannes eats all will to live. Since recovering I’ve been fooling around with Google+, trying to decide where it fits into my life.

The super-short first impression: Google+ goes right where Google Wave went wrong. This time around, it’s hitting all the right buttons, especially where privacy and ease of use are concerned.
Early on, adding random people to “Circles” (the idiot-proof version of Facebook’s wildly complex Privacy settings), I got the sense it would change my web experience. Enough time has passed since that implications for marketers remain speculative but generally agreed-upon: 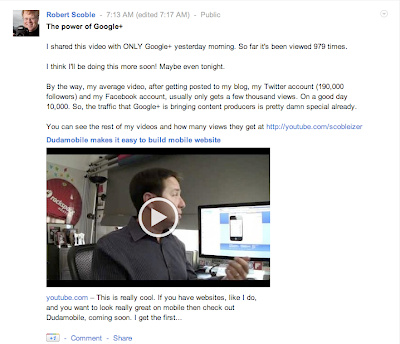 In terms of feel, posting on Google+ is about as easy as on Twitter, with a final publishing result that more resembles Tumblr or Posterous. Images and videos are beautifully presented.
It also has an advantage over such platforms in the sense that you don’t have to work so hard at outset to build your community — nearly everybody uses Gmail and is hankering for an in. (In Early Adopter-land, anyway.) Days after joining, over 100 people added me to their streams — well before I’d posted anything, and most were people I knew and had already engaged with previously. That’s a good figure.
As previously mentioned, Google properties like Picasa and YouTube are automatically integrated — so if you’re not already a user of these services, they are instantly more accessible. I generally favour Flickr and Vimeo but have already tested the photo-upload feature, which is ridiculously simple. Presentation is great and privacy settings are intuitive. This has basically made me a Picasa user overnight, and I’ll probably use this for quicker video uploading and sharing, too (which will likely resuscitate my dead YouTube account).
I said in the title of this post that this could also change PR. When you write about ads and technology, you’re heavily reliant on imagery and videos — tools that help illustrate the merits of a product, service or campaign. Email is the traditional darling for getting PR messages across, but it isn’t great for scrolling through imagery or videos in an intuitive way — you usually have to leave your email client. And then there is the question of organising PR notices that you mean to cover, but never do, because it gets lost in your email.
These problems don’t exist with Google+. (Not yet, anyway.) PR folks can write a quick piece, add imagery and videos in a snap, and publish only to a circle of journalist contacts (or the wider public). The publishing style feels like Facebook but is less ephemeral — it is easy for people to skim, copy/paste from and return to later, making it more like Tumblr but in a closed ecosystem with great scale.
Then there is the “Hangout” feature, which enables you to video chat with up to about 10 people. Nice option for briefings, meetings … or hell, just hanging out.
The main reason I think Google+ is interesting is because the barrier to entry is low, potential to scale is high and usability is fantastic. I can see people compulsively using this the same way they compulsively use Facebook, except they don’t necessarily have to leave universes that are important, like Gmail or Google Docs. This is a bit like what Rockmelt tried to do except you had to download a new browser — a small but irritating obstacle to use, which Google has the luxury of being able to skip.
It’s also directly linked to the identities of most people via their email, connecting their social activity to their existing Google profiles and producing a broad picture of who you are and what you’re doing on the Web. This also minimises spam inside the platform.
One critique thus far. My impression is that you can upload to your Google+ via mobile, but only from Android. That’s not necessarily bad news, given that Android adoption is exploding, but it does cut out tech-savvy compulsive socialites who are anchored to iPhone or other smartphone platforms. Google’s attitude is historically more open than its peers, so I hope this changes once confidence in the viability of Google+ grows.