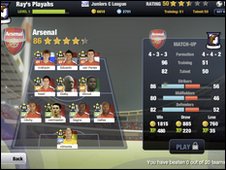 The latest video game in the Fifa football series has launched on Facebook rather than on games consoles.

The popularity of social media games has risen in recent years with up to 250 million global players logging on to various games each month.

Previous console Fifa games have retailed at around £30 but FIFA Superstars is free to play online.

The footballers making up each player’s team are purchased in packs at a cost of £1 – £2 per pack.

Players pit their teams against those belonging to their Facebook friends.

As the tournament progresses, each player earns points which can also be used to purchase team members.

Unlike console-based versions of Fifa games in which the player can decide to play as a manager, a player or both, on Facebook players can only be managers of virtual teams made up of real players from around the world.

They can also opt to participate in league games outside of their “friends” network.

“It extends the Fifa franchise by enabling you to play with friends.”

It will also reflect events as they unfold in the World Cup said Mr Segerstrale, although the details are yet to be announced.

There will be a new edition of the console version of Fifa at a later date.

This has the potential to be quite huge.. and further establishing Facebook as a nascent gaming platform.