News channels have been completely taken over by the news on the H1N1 swine flu in the last few days. Swine flu is caused by a new flu virus strain, a mixture of various swine, bird and human viruses.

The US has declared a public health emergency on Sunday. Mexico where the virus seems to have first been found have their businesses, schools, etc shutdown for days together. The World Health Organization has activated its 24-hour war room command center.

With so many news outlets reporting various numbers, it is easy to get the wrong notion between the number of ’suspected cases’ vs ‘confirmed cases’.

It is important to stay informed with the right facts. At times like these misinformation can spread like a wildfire. 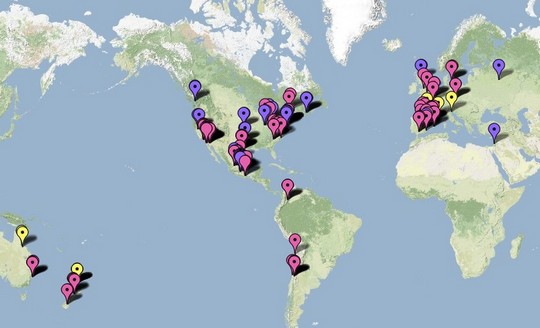 BBC also maintains a swine flu map showing the history of cases reported as the days progress. This is being updated everyday with number cases per country.

Dr. Sanjay Gupta of CNN has answered the most frequently asked questions on the h1n1 swine flu. And NDTV has a FAQ section as well.

In spite of it’s name, this virus now spreads among humans and eating pork doesn’t infect you. In fact, this virus spreads just like a common cold – when an infected person near you coughs or sneezes or if you come into contact with the virus via eyes, nose or mouth. Simple hygiene like washing hands could help protect yourself to a certain extent.

This may be online heresy but so be it, I’m going to rant. Social Media Camp then. I was told by the twittersphere, my boss and various others that it was a must attend event where like minded chaps and chapesses would meet, greet and have fun times. Sounded like my kinda event. I wanted to be there. I’d set a reminder in my work Outlook calendar telling me when tickets were available. As you can tell, I didn’t want to miss out.

Tickets released were staggered over two sittings. A wise move. Everyone that didn’t get a ticket, went nuts over it the second time round and some, perhaps not knowing what they were getting all excited over, waited patiently in line too. First round tickets went in 9 minutes, the following in 2 minutes. TWO MINUTES! I tried to get a ticket each time, unsuccessfully as work got in the way in the precious first few minutes. I didn’t expect them to go so quickly, in 2 minutes? Amazing. There were a few cancellations and I got a ticket. Happy days and a fist punch in the air later, I looked forward to it.

In the week in the run up to the SMC, for one reason or another I hadn’t really read up on what a Barcamp was, busy week at work. My bad, I hadn’t been to one before so wasn’t entirely sure what to expect. It wasn’t until the night before that I read up about all attendees having to present for 40 minutes on a topic of their choice. This was a bit of a worry, considering it was the night before. Me and presentations get on but preparation is an absolute must and lots of it. I like to be confident about what I’m talking about, to not do something half assed and to ensure that I’m pleased and happy delivering the presentation is not something I can do over night. God knows how I did it at University and I’m certainly not bloomin’ @whatleydude who did his in the lunch time before his afternoon slot. Now that’s ninja. I’m happy to contribute to the debate, help out with anything behind the scenes, I just wasn’t really down with presenting. Deliberated over whether to go or not, and thought could I turn up without presenting? I put a tweet out there asking if presenting was a must, everyone that came back to me essentially said yes, you can’t turn up without presenting, like this one and this one.. It’s like the LAW! Which bothered me more and made me think that I couldn’t possibly turn up without having something prepared.

So I watched proceedings from a distance through the hashtag on Twitter which was #SMCLondon. I saw people’s pictures put up to Twitpic, I watched some brilliant people’s video recordings of presentations. Some speakers even put up their presentations soon after doing them. It was almost as if I was there yet it didn’t replace the fact that I felt a bit of an idiot for not being there. As the reviews flooded in after of the day, I kicked myself further. Then I read this, which offered a different perspective and I’m really glad it wasn’t just me that felt put off going.

Stop whining? Probably. I know that Social Media is to encourage collaboration, open ended conversation and sharing / thoughts and ideas but I wanted to go myself primarily to learn from real experts, the people who are getting up and talking about the topics and issues close to them and current today. People fascinate me, their backgrounds and how that relates to what they are doing now, their delivery of their chosen topic and what I can learn from them. I wonder why I studied Marketing and not Psychology at Uni!

My reason for wanting to go to Social Media Camp was to spectate (whilst observing and learning), the very thing that is positively discouraged. I’m a relative upstart to the industry, 22 years young and always looking to learn from the best. Whilst growing in knowledge, I don’t feel like I have enough experience to put that on others in a conference style format. It’s something I’m working on. So why don’t I just go to a conference? Tickets for those are usually cost prohibitive being thousands of pounds each. With that in mind, there’s definitely a need and a place for Social Media Camp. It was unfortunate that the second day of events had to be cancelled because of event sponsors pulling out, another case to show that even though tickets were sold out in an incredible time, monetizing social media is a thoroughly perplexing issue.

Tying in further was an email I got through today from an agency which read as follows.

How you doing? I came across you online (no surprises there!) We are a PR agency based out of the UK and are in need of an expert to present on social media to one of our clients, and I am hoping you might be the man for the job.

I don’t think I’ve been addressed by my surname in an email since school but I skirted past that.

My response soon after was

I think you might be looking for someone a bit more senior for this. I’m hugely flattered though. Here’s a few people I think may be more suitable. (emails supplied).

You’re probably thinking, idiot!? Turning down a great opportunity like that, grow some balls and man up! And you’re 100% right. As I said, flattered and it’s great to be achieving exposure for the right reasons but I felt embarrassed at the idea of being called an expert, it was all wrong. That term is banded about far too frequently.

So to come back to SMC – There’s been a fantastic response in the comments section to Kat Neville’s post here (which I might add is a stylistically fantastic web page) You should check it out, some great thoughts and view points.

What do you think? Is there a place for spectators at a barcamp style event?

Following on from my post previously from The Times here another interesting read was found in the 16th April issue of NMA where Rebecca Jennings, Principal Analyst at Forrester Research wrote a similar piece how an older age than expected is using social media. The following is a repost of that article.

Most interactive marketers know that young consumers are very engaged in social media, but many fail to appreciate that the same social tools can also be used to reach older users. Recent Forrester research shows there are a significant number of European baby boomers – adults aged 43-63 – who already read social media on a regular basis, and another, slightly smaller subset who are already uploading their own content, like videos, onto the web. Marketers can take advantage of this by offering them value with useful information and support provided in a social context.

Overall, 47% of younger boomers – those online adults aged 43 to 52 – now engage with social media on a regular basis, as well as the 41% of older boomers – those aged 53 to 63 – that also take part. In each of the groups, more than a third can be classified as spectators, or those who are reading social content such as blogs at least monthly.

While boomers are taking the plunge into consuming social content, they’ve been slower at joining social networks; just 10% of younger boomers and just 7% of older boomers participate in this type of activity. For example, one of the most popular social networks aimed at older consumers, SagaZone in the UK, has around 45,000 users, compared to Facebook’s estimated 18m+ users.

Despite their resistance to joining social networks, both young and old boomers are contributing their own opinions online – known as being a critic. These critics do things like participate in forums or post their own reviews online. Encouragingly for marketers, around a tenth of both age groups fall in to this category and a slightly smaller percentage, 9% of younger boomers and 7% of older ones, are creators: those who upload their own content or write their own blogs.

Marketers should also take note that just as participation in social media varies between age groups, it also varies between European countries. Dutch boomers lead the pack as the most engaged older audience overall, with 69% of 43-52 year olds and 60% of 53-63 year olds using social media on a regular basis.Of these other Europeans, Italian boomers are the keenest creators, with around 17% of younger boomers and 14% of older boomers involved. Younger boomers in the UK are considerably more engaged than older ones, with around 52% of 43-52 year olds engaged in social media, but just 38% of 53-63 year olds. About 40% of boomers in both France and Spain are keen spectators but just a third of the German boomer audience are engaged in social media.

Something starts to get really big when the spammers wade in and the jokers make fun. The below video is freakin’ hilarious.

So everyone’s going tweet this, tweet that, what on twearth is this all about and how are they ever going to make any twoney? Ok maybe with less of the tw’s but there you tw-go. Let’s forget about the money part for a moment, in a recent interview Biz Stone said that they are currently working on value, the more value they can provide through Twitter, the more it will be worth. I think they’ll be alright for some reason.

This has probably done the rounds already in the tech circles but it’s still pretty fantastic.